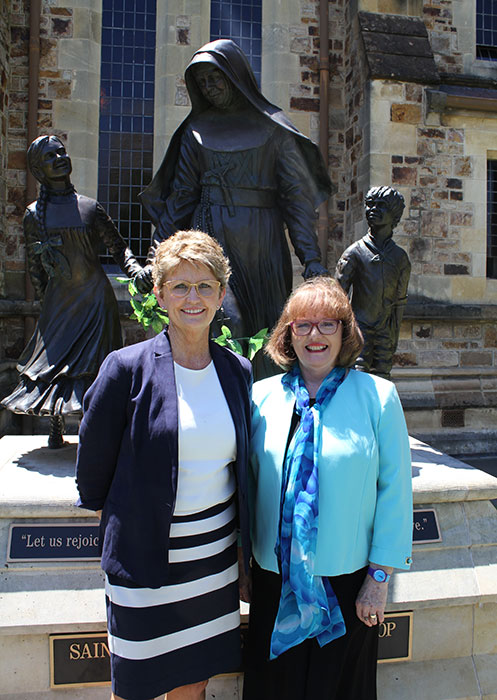 Chancellors in the Archdiocese of Adelaide

An original article written for Women Matter by Debra Vermeer

The Adelaide Archdiocese has a proud history of women in leadership - a legacy that Archdiocesan Chancellors Heather Carey and Pauline Connelly are delighted to embrace and build upon.

Pauline is Chancellor within the Archdiocese and Assistant Director of Centacare Catholic Family Services, the welfare arm of the Church, which has more than 500 staff. Pauline has responsibility for Catholic mission and identity, child protection, support of Aboriginal staff, and Cultural Competence within the workplace. She also supports and mentors managers within Centacare.

They join the third Chancellor of the Archdiocese, Dr Neil McGoran, who is the Director of Catholic Education South Australia, Teresa Lynch as Director of Ministry and Leadership, Vicar-General Fr Philip Marshall, and Dale West, Director of Centacare, on the Archbishop’s Leadership Team.

Heather and Pauline follow a line of female Chancellors in Adelaide, going back to Archbishop Wilson’s appointments in 2002, of Sr Clare Condon SGS and Kathy McEvoy, as Chancellors. Sr Clare was later joined by Jane Swift, then Pauline Connelly, followed by Cathy Whewell, Heather Carey and Helen O’Brien.

Heather says it is a privilege to be part of an Archdiocese where women are encouraged into leadership roles.

“Archbishop Wilson really values and appreciates women in all areas of Church life and especially, I think, the balance that this brings to leadership.”

Heather was born in country South Australia and completed her schooling at boarding school, first with the Josephites at Port Lincoln and then with the Mercy Sisters in Adelaide.

Most of her career has been in education, as a teacher and then as Co-Principal at Mary MacKillop College, Kensington and one of the founding Co-Principals at Nazareth Catholic College, Flinders Park.

She says it was “a huge surprise” when Archbishop Wilson invited her to take up the position of Chancellor for the Archdiocese.

“It was a big leap, from education into this position, and in the beginning, I didn’t realise just how transferrable these skills were. I’m now in my ninth year of this very special position.”

Heather says her job requires her be a member, or Chair, of a wide range of committees and other entities throughout the Archdiocese and to help exercise governance and oversight of policies and procedures.

“I’m someone who likes strategic planning and meetings, so I find this very interesting,” she laughs.

“When you’re part of a strategic plan that is embedded in the Gospel, the work you do is really very different. It’s inspiring.”

Working with parishes, clergy and communities throughout the Archdiocese is also an important aspect of her role.

“I’m finding the Renewing Parishes program throughout the Archdiocese to be very significant,” she says.

“I’ve been really moved by my opportunities to work with people in the parishes,” Heather says. “When you see what good people are doing on the ground and never giving up, I find that really life-giving.”

Pauline was born and bred in Port Pirie, and was schooled by the Sisters of the Good Samaritan, who she says have been “a really big part of my formation”.

A career in social work, specialising in marriage and family counselling followed, with the last 25 years being in leadership and management, something Pauline says she continues to love. She features regularly on ABC Radio in Adelaide, talking about relationship and life issues.

Invited by Archbishop Wilson several years ago to become a Chancellor of the Archdiocese, Pauline accepted the job, but after a while found she was missing the welfare context, so she resigned and moved back to Centacare as Assistant Director.

A couple of years later, the Archbishop asked Pauline to return as Chancellor, but this time retaining her role as Assistant Director of Centacare.

“My leadership position within the Archdiocese gives me a window into the enormous challenge of asking how we can all continue to build a more open, inclusive, inspirational and kind Church where people feel valued and included,” Pauline says.

Like Heather, Pauline pays tribute to Archbishop Wilson, saying he is “very, very encouraging of women in the Church”.

“And it’s not token. I really do feel I have a voice in leadership within this Archdiocese and that my voice is listened to,” she says.

“And I never take that for granted, because I know my experience isn’t lived out by a lot of other women in the Church. I think we’re on a longer walk to have more women in authority, but it’s the Emmaus walk, with Jesus, and, as we know, the Emmaus walk stretches on.”