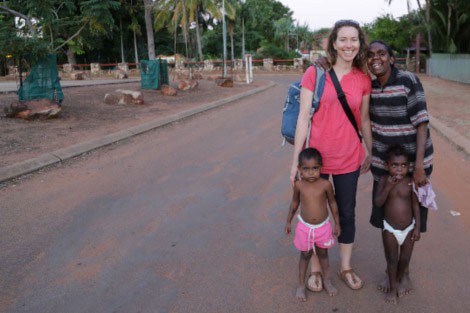 It's incomprehensible how a child can take her own life. Back in March, news broke that a ten-year-old girl had committed suicide in the remote Aboriginal community of Looma, in the Kimberley.

She had compounded trauma and hurt most of her young life as a victim of family violence, which by the age of ten became too much to bear.

Let us think about this for a moment. How did she know that suicide was an option?

Recently I spoke to Clare Wood, who has a background in remote Indigenous mental health care in the Kimberley. She said the region has such a history of suicide that people from a very young age know that people die by killing themselves.

Research indicates that knowing someone who's died by suicide increases chances of harbouring suicidal thoughts and acting on them. And statistics indicate 95 per cent of Aboriginal Australians are affected by suicide in their families, sometimes across generations. So, do the math.

The government's ambiguous and often paternalistic approach to Indigenous affairs is well established. At one end there is the forced closure of remote communities, and at the other Prime Minister Turnbull acknowledging the suggestion from Aboriginal leaders: Do things with us and not to us.

Narungga Elder, Tauto Sansbury in his searing response to the PM's Closing the Gap speech in February, said that the 'gap' would always remain unless the state and federal governments 'gave up their missionary approach to Indigenous affairs'. He called for recognition of the reality of the everyday life of Indigenous people.

Community and family are central to this. It's no surprise, because it is the tight-knitedness of community or family circles that is often the refuge for those struggling with trauma.

"People were different when they were out on country than when they were in the confines of the community. A lot more language was spoken, stories and cultural notions were shared."

Wood works as an enterprise facilitator for Enterprise Learning Projects, assisting women in remote communities in Kalumburu, Western Australia, to set up their own businesses. She aid the women utilise their profits for cultural activities like going out to country for fishing, or for a long walk, often taking the young along.

During one visit to the community, Wood accompanied the women and noticed that people were different when they were out on country than when they were in the confines of the community. She observed that a lot more language was spoken, stories and cultural notions were shared — something the children did not hear their parents do too often in the community.

A cross-generational revival and transmission of knowledge was taking place as part of this ordinary walk in the bush to find bark to make clapping sticks from, perhaps to be sold commercially.

From a mental health perspective this is important. Canadian research that studied suicides among First Nation's youth in Canada indicates that indigenous communities that have continuation in their cultural practices have lower rates of suicide.

But it's not easy to just venture out into the bush to fish or for a walk. Wood said cultural funds that support such activities, which may include a serviceable vehicle to drive into the bush, petrol, fishing gear etc., are not readily available.

'That's the main factor why the women want their own businesses,' said Wood. 'It might sound simple, but support to go fishing once a month with families, to go back on out to country, things like that might not be funded in an ongoing way, and that's where the women were like, "We know this is what our young people need, we know this helps families, we want to find a way to be in control."'

Doreen, a women's leader from the community in Kalumburu, said, 'it is our dream for us women to get up and make the community stronger. Us strong women are volunteers to make things good for our children and our future, so funding can help us to do this.'

Such determination ought to be respected and facilitated. What this means is making avenues where Indigenous culture and cultural life are at the centre of the conversation to effect change. Instead of adopting a 'helping' attitude, there needs to be a shift towards facilitating self-agency as an economically rational approach when it comes to Indigenous Australians.