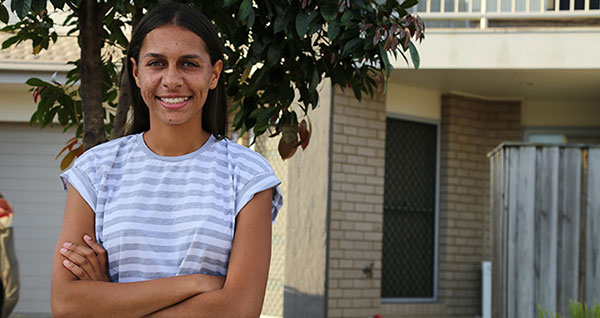 This article was written by Emilie Ng and was published in the Catholic Leader on 26 October 2015.

Talisha Thompson, a proud Aboriginal Year 12 student from St Peter Claver College, Riverview, and one of Queensland’s top indigenous netball players, has dreams of being a psychologist to help indigenous people.

“My mum always said, instead of helping other people first, my own people need help first,” Talisha said.

“It’s pretty bad now, in our communities … the drugs, alcohol and mental health.

“That’s why I want to be a psychologist, to help them.”

“I want to help my people …

“I want to give them a voice.”

Talisha recently was accepted into the Australian Catholic University’s psychology course, and has taken up the role as the university’s indigenous ambassador.

She has also represented the Aboriginal people at a Catholic religious education congress in Anaheim, California, in March, visited Malaysia to represent indigenous school girls and made a TV appearence during the Broncos’ National Rugby League indigenous-round match earlier this year.

“I just love being Aboriginal,” she said.

“Being an indigenous … it’s pretty cool because we’re part of the oldest living culture in the whole wide world.

“Both my parents are indigenous – my dad’s from this area, so these are his tribal lands here, the Yuggera people, and my mum’s from way out west.

“I can’t really explain it; we have a connection to everything here.”

Talisha hopes to take her indigenous culture to the Philippines, where she will spend two weeks on an immersion trip during Schoolies.

The program, run by Marist Youth Ministry and open to students from Australian Marist schools, offers young people a “meaningful” celebration to farewell the high school days by helping the poor.

“Everyone was talking about going to Schoolies … and I didn’t want to go to Schoolies on the Gold Coast because I don’t really find satisfaction in that,” Talisha said.

“I’d rather help other people instead of going and getting drunk at Schoolies.”

But with school fees to pay, and netball competitions to fund, and debt from recent school trips representing her indigenous heritage at events in America and Malaysia, Talisha isn’t certain she can pay her own way to the Philippines.

“Dad was thinking of doing a garage sale, sausage sizzles, even bake sales,” she said.

The indigenous teenager has already raised more than $300 for the trip but still needs more than $1600 to fund her two-week trip to the Philippines.

“It would be an amazing opportunity,” she said.

“None of the other kids in my school got accepted into it.

“And being a young indigenous person, no one else in my community can say they’ve done that.”

For information on how to help Talisha get to the Philippines, contact Marist Youth Ministry on 0409 451 822.