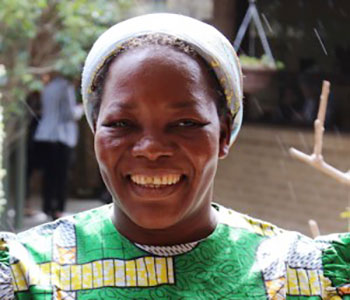 This article was written by Aoife Connors for the ACBC's MediaBlog and was published on 18 August 2015.

Helping girls and young women overcome trauma and heal following beatings and sexual violence is the healing ministry of Sr Angelique Namaika, a woman with a passion for justice who is transforming her community.

Sr Angelique received the United Nations High Commissioner for Refugees (UNHCR) Nansen Refugee Award in 2013 for ‘her exceptional courage and unwavering support for survivors of brutal violence in Democratic Republic of the Congo (DRC).’

Sr Angelique said that such brutality is carried out by the Lord’s Resistance Army (LRA), a Ugandan rebel group that moved into the DRC about ten years ago.

‘It’s a rebellion that comes from Uganda touching four countries in the region.’

The rebels’ influence has decreased because the Congolese Army now live in our community to protect us.’

‘Our wish is that the rebellion stops so that we can live peacefully. If you can only stay within the limits of where the soldiers are protecting you, it’s not liberty. You need to be able to move freely.’

Sr Angelique was invited by the UNHCR to share her experiences with people in Australia. Her visit coincides with Migrant and Refugee Awareness month, August 2015.

She visited the ACBC General Secretariat in Canberra on Monday 17 August with Thomas Albrecht, UNHCR Regional Representative, to speak to a gathering of staff from the Australian Catholic Migrant and Refugee Office (ACMRO), Catholic Health Australia (CHA) and the Secretariat. This was followed by morning tea.

Sr Angelique is filled with compassion and kindness as she speaks to us. She wears a smile and there’s a real sense of hope in her voice.

‘I’ve came to Australia to give my testimony about the activities I’ve developed for women who have been victims of atrocities of the LRA,’ she said.

‘The rebels [LRA] continue to attack,’ she said.

‘There are lots of kidnappings in the villages – women and children, boys and girls, mostly between 10 to 12 years old.’ Many of the LRA’s victims are raped, beaten and forced into sexual slavery.

‘As soon as they are kidnapped, they are given as wives to the rebels.

The girls are victims of sexual violence. They have to meet the demands of what their husbands want.’

‘Some women who came to us from the bush come out with one or two children, some leave pregnant.’

‘The women are treated like animals, they give birth and then have to keep working in the bush as if they had not just given birth.’

‘Older women were not kidnapped but were beaten by the rebels because they didn’t want to let their daughters go. The rebels beat them for their children.’

Sr Angelique lives in a small village called Dungu where she has helped to rebuild the lives of more than two thousand women.

Many of the women taken to the bush by the rebels, never return. Of those who escape, their bodies are mutilated. ‘Arms have been amputated, they have become victims of sexual abuse and many women return pregnant.’

‘It’s up to the community to help them and to look after the children because often the women are traumatised.’

‘Some of the women in our community, their husbands have been taken by the rebels and killed, their children have been killed, so this is the life they must live.’

Sr Angelique helps the women to overcome trauma, recuperate after rape and abuse and rebuild their lives by learning new skills and doing practical activities.

‘It’s possible to heal from trauma,’ she said.

‘It’s very important to listen to the women to help them overcome the trauma. Some women choose prayer in order to heal.’

‘We also have activities to help the women gain jobs to become self sufficient in their lives and to become independent in society.’

‘Self sufficiency is vital for them,’ she explained.

‘Some of the women think that they should go back to the bush because they don’t know how to live in the community anymore after their traumatic experiences with the rebels.’

Sr Angelique has established a bakery, which employs 200 women and has made bread affordable for people in the village. She has built a school, an orphanage and started a farm to provide employment and fresh food.

Asked whether she was worried about the children and women in her care while she was overseas, Sr Angelique said, ‘God will protect them, he always does’.