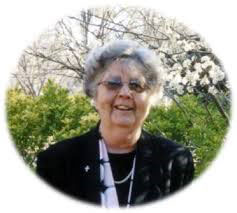 Adele Welbourne was born on 7th March 1925 in Maitland.  Her primary and secondary education were undertaken at St John’s School and St Mary’s Convent Maitland, so Dominicans were always part of Adele’s young life.  She became a member of the Dominican community in 1943, on her 18th birthday.  Adele made profession as Sister Louise Marie on 4th December 1944.

Louise quickly made her mark as educator extraordinaire.  She taught in Maitland and Tamworth, and was principal at Corpus Christi Waratah, St Paul’s Moss Vale, All Hallows, Bathurst, Rosary Demonstration School, Canberra and St Lucy’s School, Wahroonga.  From 1970-1977 she was primary supervisor of Dominican Sisters of Eastern Australia schools, and offered very effective, challenging and inspiring leadership.  Louise was also a member of the Congregational Council from 1973-1981.

Her thirst for knowledge meant for Louise a lifetime of study.  In 1966 her library studies introduced her to children’s literature and she in turn enlivened this area for generations of students at Signadou Teachers’ College, as it was then known.  After Vatican II, she relished the new opportunities for Scripture Study and achieved a Dip. Theol. in 1967.  In 1971 she completed a Dip. Rel. Ed in London.  By 1982 she had attained her BA and in 1987, her M Ed.  Her thesis focused on ‘The Religious Education of Catholic Adults’.  Finally, in 1996 she was proud to be awarded her PhD (UNE) with her thesis: ‘Critical Religious Educators: The Role of Graduate Studies in Their Professional Development’.  Except for her studies in London, all of Louise’s education was undertaken as a part-time student, while on a full work load.  Such was her dedication to learning and to ministry.

Louise’s final years in ministry, from 1990-2007, were spent at Signadou Campus of ACU, Canberra.  Louise loved to work with young teachers, especially in the area of her passion, Religious Education.  In her later years, her work was with Doctoral students, and as editor of ACU’s refereed, academic publication ‘The Journal of Religious Education’.

As her health and her eye sight declined, Louise realised that she was being called to give up so much of what she had given her life for, and been enlivened by.  In 2007 she moved to Newcastle where she could be nearer her much loved family.  Finally, in August 2012, Louise became a resident of St Martin de Porres Hostel, Waratah.

We give thanks for her peaceful return to God on 9th June 2015.

Louise was a loving and much loved woman of great intelligence, who lived what she preached, and who lived to preach the Gospel.  Her passion for religious education, and the role of teacher, lives on through the many, many students who caught her enthusiasm, felt inspired by her confidence in them, and were grounded in solid educational principles by her wise counselling.

‘Blessed are those who instruct others, for they shall shine like stars for all eternity’.  (Dan. 11.3)