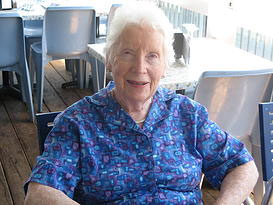 This article was written by Martine Valentine.

Margaret Bubb was one of the first PRH Educators to be licensed in Australia gaining her license on August 6th 1986 the Feast of the Transfiguration, PRH's celebration day.

After being introduced to PRH in NSW she used the process when she went to Papua New Guinea in 1983. Margaret, and others, brought the psycho-educational model known as Personality and Human Relationships to the people of the Central West in NSW, Australia.

PRH in Australia also owes much to the generosity of religious groups such as the Sisters of Mercy in supporting Margaret and others in making the benefits of PRH accessible to so many.  The early team also included Margaret's sister, Jeannette Bubb.

For a period of time, Margaret was on the official PRH International team for Australasia in Thailand and she participated in several meetings, workshops and conferences there.

Margaret could always see and relate to the best in others – the “gold”.  This deep respect for others was palpable in her presence.  When first participating in PRH workshops, I noticed that in sharing the personal insights gleaned from the methodology, not much was said in response... by anyone, not even by Margaret, the facilitator or 'animator', as PRH educators were then known.  At first, not to be acknowledged or affirmed was a little disconcerting as it is really an act of courage to bare one's soul to a group. However, it was made very clear by Margaret that this was not necessary, and hers’ and others’ respectful silence soon became a soothing balm, communicating so much more than any words could, allowing for total freedom. Although, occasionally her quietly joyful smile and twinkling eyes communicated that little bit extra.

A number of PRH workshops cater for creative expression and I found these to be very powerful experiences. In my early adult life I was very fortunate to participate in many of these 5 day intensive workshops. Through this process, I was able to heal from past wounds, let go of negative beliefs and feelings, and expand my positive self; my Inner Being which is the term used by PRH to describe that inner core of radiance where we believe the source of all life resides.  In doing so, I am fortunate to have been able to grow to be a very happy person. In reflecting upon this at the time of Margaret's death, I came to see that I owe my happiness to Margaret.  I am so grateful to her for all she was for me and others. She gave of herself freely for this work using her many gifts, such as her intelligence, her practicality and of course her feistiness, to expand the PRH work around a large geographical area.

What I learned from Margaret and PRH is so much more solid and beneficial compared to my rather expensive Graduate Diploma in Counselling and Psychotherapy. My experiential learning from PRH over many years, very much forms the basis of my own therapeutic practice as a counsellor and art therapist. I guess it has something to do with what Margaret called “the lived experience”.  In PRH, the theories are totally integrated with the practice and therefore the therapeutic results are natural, deep and unforgettably imbued into a person's very being.  I am so grateful to Margaret and Jeannette for their hard work in offering the methodology to the people of Dubbo and surrounding areas, and I know many others are too.

Margaret reluctantly retired from an active role in the work when she turned 70, (according to the convention of PRH International at that time), even fairly recently I heard her say that she had had another good 10 years in her.  One of her consolations at this time was to have been able to mentor Zofia Di Stefano in Melbourne, who continues the expansion of PRH in Australia from her Melbourne base today.

I will honour Margaret by continuing to live in the way she shared with me and others, by being myself and living in freedom, and by expressing my Being, the best of myself, in the world.

I used to refer to Margaret as my GURU, and when I think of her I think of her sparkling eyes. The lessons learned from her were lessons for a spiritual life and simply, for a happy life.  Margaret lives on when I joyfully share what I can with others for their growth and healing. Ultimately we do this for the betterment of society as a whole, which was the purpose of Andre Rochais in developing his methodology, PRH.

Just as the seed dies and allows for the germination of new growth, I believe that new growth will spring up in many surprising places and ways as a result of this beautiful and gracious lady, Margaret Bubb.

Thank you Margaret for your GRACE and for sharing it so generously with so many people.

To find out more about PRH Australia go to: www.prhaustralia.com