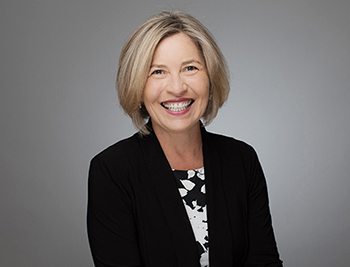 This is an original article by Debra Vermeer

From the age of 12, Anne Gallagher wanted to work for the United Nations, an ambition she went on to achieve, but that 12-year-old could not have foreseen that she would also become the first female President of the Catholic Church’s international agency for migrants and refugees.

Anne, who was born and raised in Strathfield, Sydney, was elected President of the International Catholic Migration Commission (ICMC) in March last year – the first woman ever to take on the role.

“The ICMC is an amazing organisation,” she says. “It is one of the leading civil society organisations operating in the migrant and refugee space and has a noble history and a long list of achievements to its name.

“And I come to the position at a very interesting time globally, but also for the ICMC, which is seeking to shape a future where it needs to be as relevant and effective as possible in a more crowded, dynamic and challenging space.”

A former student of Santa Sabina College in Strathfield, Anne says she grew up in a family of deep faith, which helped to shape her worldview and her commitment to social justice.

“I had wanted to work for the UN since I was 12,” she says. “I had no idea at that age how that could even be possible, but I knew that if I could choose what I wanted to do with my life, then that would be it.”

The opportunity came after Anne completed a Law degree at Macquarie University and then a Masters in International Law, at Australian National University, where she taught for a short time before being recruited to join the UN in 1991/92.

“I moved to that part of the UN dealing in human rights in Geneva, and spent the next 11 years working on human rights in areas around women, peace-keeping, the death penalty and other areas,” she says.

In 1997 the former Irish President Mary Robinson was appointed the UN’s High Commissioner for Human Rights and asked Anne to work with her as senior advisor on human trafficking.

“We worked together closely and managed to make a real difference. Our work coincided with the UN developing the first modern treaty on human-trafficking,” Anne says.

“We led the charge to ensure that human rights were at the forefront of that work – and we followed up by leading the development of global principles on human rights and human trafficking which are not part of international law and policy.”

Soon after fulfilling her mandate there, and having married and had twin daughters, Anne took the decision to leave the UN.

“The UN turned out to be a difficult place for women,” she says. “Women were certainly allowed to do the jobs traditionally reserved for men, but nothing else about that institution had changed for decades. If you were a professional in the UN, it was assumed you had a wife at home, packing your bags and looking after the family. There was absolutely no flexibility for women with children. I’m so glad to learn that there have been some improvements since I left but we still have a long way to go to create the space for women to make the contribution they are capable of and that we, as a society, need so badly.”

After leaving the UN, Anne, who also holds a PhD from the University of Utrecht, was recruited by the Australian Government to lead a program in the fight against human trafficking. The program, which continues to this day, has been instrumental in changing laws, policies and practices within and outside the region. Anne credits the Australian Government for its foresight in taking up this issue when it had a much lower profile.

She has received multiple awards for her work including the Australian Freedom Award (2011); US Government Trafficking in Persons Hero (2012); Australian National University Alumni of the Year (2013); and Peace Woman of the Year (2015). In 2012, she was appointed Officer of the Order of Australia for her distinguished service to law and human rights.

Before being elected ICMC President, Anne had worked with the Vatican on its first initiative in human trafficking and modern slavery in 2013. She was also a founding member of the Archbishop’s Taskforce on Modern Slavery in the Sydney Archdiocese.

Anne is full of praise for local initiatives to tackle slavery and human trafficking, including the work of Australian Catholic Religious Against Trafficking in Humans (ACRATH).

“Australian women religious in particular have done a stellar job in raising awareness of this issue,” she says. “Particularly in the early days when there was less interest and much less commitment. Their focus has always been practical, especially in terms of victim support.”

Anne believes there are great challenges for governments and bodies such as the ICMC in tackling exploitation in migration including human trafficking and slavery.

“But the ICMC is uniquely placed. It has a very good record of doing a lot with little. And it has a dual identity in as much it is engaged on two key fronts – advocacy and practical good works,” she says.

The ICMC advocated strongly towards two global compacts on refugees and migrants which were adopted in Marrakesh last December.

It also has offices across the world which work directly, at a practical level, with refugees and migrants, providing a range of services and supporting resettlement in third countries.

“Over its history, the ICMC has resettled more than a million migrants,” Anne says.

“It’s important to separate out the different strands of Australia’s immigration program,” she says. “There is no doubt that over the years, some aspects have been extremely troubling, but others are positive and resettlement is one of these. We are a country, a community, that welcomes news arrivals and it is critical that this continues.

“ICMC‘s longstanding experience of resettlement is available to all countries, including Australia. I am very happy that Australia has been a strong and consistent supporter of the ICMC and is one of the donors to its work.”

Anne says she believes Pope Francis is leading the way in faith-based leadership around human trafficking and migration.

“In a world really lacking in leadership, where there is a vacuum of true moral and political leadership around migrants and refugees, the Catholic Church, through the vehicle of the Holy Father, has stepped into that vacuum,” she says.

“The Holy Father’s words and actions have been the bright light in an otherwise very dismal political landscape around what he has termed ‘the globalisation of indifference’ to the plight of migrants and refugees.”

Anne was elected to the Presidency of the ICMC by representatives from 53 Bishops’ Conferences around the world and is aware of the significance of being the first woman ever to hold the position.

“My election as the first woman to ever lead the ICMC is a milestone,” she says. “But so is the fact that I was elected on a platform of change and renewal. I found that to be really encouraging.

“And of course, it’s not just about a woman taking on a role like this, but the laity in general taking up leadership positions in the Church.

“Big change never happens quickly. But even the largest ship can be moved a great distance by shifting the tiller even slightly.

“Much remains to be done but there are positive signs of change - reflecting a shift away from how things have been for a long time and reimagining how they might be done into the future.”