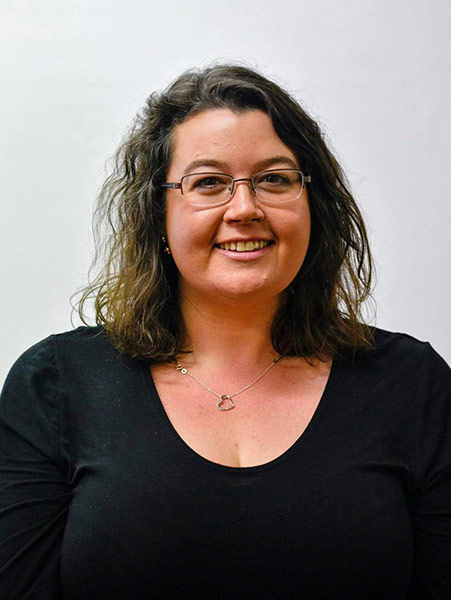 When she joined ‘Young Vinnies’ as a kid in Adelaide, it’s fair to say Claire Victory probably wasn’t thinking that one day she would be National President of the St Vincent de Paul Society in Australia.

“Young Vinnies was a group I was involved in from the ages of 10 to 16 in my parish, and for me, the social element was definitely important,” she says.

“We had meetings on a Friday night and we’d be having pizza and planning fundraisers.

“And we’d go and help in the local Vinnies shop and go out with Vinnies conference members to visit elderly people to offer companionship.”

Claire was born and raised in Adelaide where she still lives and works as a solicitor. She grew up in a Catholic family and is the eldest of three girls.

“Our family’s faith was very much a community thing,” Claire recalls. “We were very involved in our parish at Edwardstown. We grew up going to Mass there and Mum helped establish a family-based sacramental program in the parish. We knew and associated with other families in the parish and, through the Family Groups; we would socialise and share meals and outings together.

“My sisters and I were altar servers, special ministers and readers and Mum was a pastoral associate in our parish.

“The Mass itself was very community-focused in our parish and there was always a cup of tea afterwards.

“So, for us our faith life was very much about being involved and helping out. That’s always been Church for me.”

After leaving school, Claire studied Law and Arts at Flinders University, during which she did her practical legal training placement at local firm Duddy Shopov. When she graduated, they kept her on as a solicitor and she remains at the firm today.

Throughout her studies, Claire had remained involved with Vinnies, moving on from Young Vinnies to involvement with the youth programs of the St Vincent de Paul Society state office.

“In the youth programs, we helped disadvantaged and at-risk kids and teenagers and provided activity days and camps for kids who wouldn’t otherwise get those opportunities,” she says.

From there, she became involved in various national committees of Vinnies, and from 2004-2007 worked part-time for Vinnies as a School Liaison officer, where she would go out to schools and talk to students about social justice.

From 2007-2008, Claire helped coordinate the Society’s involvement in World Youth Day Sydney, and in 2011 she was asked to join the National Council as Vice President, a position she was asked to stay on in when Graham West became National President four years later.

“During that time I joined a conference, and am now a member of the Adelaide conference of the St Vincent de Paul Society; we go out and do home visitation, offering assistance and a friendly presence to people,” she says.

Claire was elected National President of the St Vincent de Paul Society in March this year and says while her life is full, between Vinnies, other volunteer commitments and her work as a solicitor, that’s how she likes it.

“I have a very supportive employer. They’ve always been supportive of my community involvement and volunteer work,” she says.

“I enjoy all the things I do. Also, I don’t have a partner or kids, so if I’m not home for several days because I’m away at meetings, it doesn’t really matter; I don’t have the responsibility of running a household like many women do.

“And I’m very close with my family. They’re my real support.”

Claire’s role as National President of the St Vincent de Paul Society involves chairing the National Council which oversees and coordinates the activities of the Society in Australia.

“While a lot of the resources and activities of the Society are coordinated at the state and territory level, there are some issues and activities where it makes more sense to take a national approach, especially in terms of advocacy and marketing,” she says.

“So I see our role on the National Council as supporting, educating and empowering our members nationally and letting them know that they are part of something bigger; as well being a member of their local conference, they’re part of a national and an international Society.

“We’re also responsible for making sure members are well formed in our Vincentian values and charism and well supported in what they do at the local level, because our strength lies in our members.”

Claire says that while the St Vincent de Paul Society is a diverse international body, its common purpose unites it.

“The work can take on a different flavour in different parts of the world, but at its core the Society is a community of people inspired by their faith coming together and sharing their faith and resources with others,” she says.

“It’s about giving something of oneself to others, seeing Christ in others and respecting people’s dignity.

“Vinnies does of course provide material assistance, but what can be even more important is the hand of friendship given to people who are on the margins, who are lonely, who are living with a poverty of spirit.”

Claire says her time with Young Vinnies, back in her childhood helped form her for the work she does for the Society today.

“When we would go out with the members and visit people and spend time talking with them and ease their loneliness and isolation, that’s when I learnt what Vinnies was really about. When you do that, in people’s homes, you are really meeting people where they are at in every sense.”

A pilgrimage to World Youth Day in Toronto, Canada in 2002, highlighted for Claire her vision of Church.

“Seeing how other people manifested their faith, it made me realise that my faith was very much grounded in community, serving and social justice,” she says.

“The stories of the Good Samaritan, Zacchaeus and Jesus reaching out to people who were shunned, being with people, even if that means getting dirty or being shunned yourself, those are the stories that touch me.

“For me, it’s not about the hierarchy and all that, but about building relationships and being inclusive. That’s what I see the Church truly is and should be.”