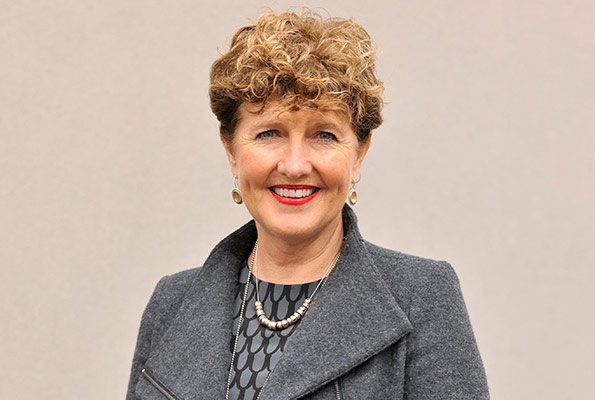 Lifetime of caring for the vulnerable fuelled by Gospel values

Dr Robyn Miller has devoted her career not only to caring for vulnerable families and children, but also helping change the system to allow for early intervention which supports families who are struggling and helps prevent and treat trauma that can lead to break-down.

She has 30 years’ experience in community services, local government and child protection sectors, and has practised in both the public and private sectors as a therapist, clinical supervisor, consultant and lecturer.

From 2006-15 Robyn provided professional leadership as the Chief Practitioner within the Department of Human Services in Victoria, was a member of the Victorian Child Death Review Committee for 10 years and worked as a consultant with the Royal Commission into Institutional Responses to Child Sexual Abuse. She is a board  member of Catholic Professional Standards Ltd and Catholic Social Services Australia, and was the recipient of the inaugural Robin Clark PhD Scholarship in Victoria.

Robyn, who was born and raised in West Preston in Melbourne and educated by the Good Samaritan Sisters, says she always had a strong interest in social justice.

“I think that was instilled by my family and faith, but also by the Good Sams at Santa Maria College, Northcote,” she says.

“They were great educators and there was a strong focus on social justice running through everything we did there.”

Robyn says she was always interested in youth work and after school she completed a four year degree in Psychology and Social Work.

“The degree was great, but I think I learnt as much from the volunteer work I did during uni with the Brotherhood of St Laurence at the Fitzroy Flats (public housing high rise) and also with the Vinnies soup van. I loved that engagement with the people,” she says.

Robyn’s passion for improving social support systems was partly sparked through her own family experience.

“I’m one of six kids and my youngest sister has Down Syndrome,” she says. “The doctors told my parents to place her in an institution and I remember having this fierce welling up of protectiveness – ‘You’re not taking my sister!’ – and my parents reacted likewise. They were always going to love and care for her at home. She’s 46 now and of course is much-loved.

“I think that was a formative experience for me in realising that the system could and should be better.”

In her first job with the precursor to CatholicCare, Robyn was part of a team setting up an innovative community-based respite for families in the high-rise flats so they could have a break from their kids. She also worked in pregnancy and family support, “helping people to keep their family together”.

In 1986, married and with the first two of five kids, Robyn took a year off and the family travelled through Europe and the Middle East.

“We had an absolute ball, driving around in a camper van. We had Easter in Jerusalem and drove across the Sinai Desert. It was fabulous,” she says.

Her next job as a family counsellor with the City of Fitzroy once again involved outreach to the people in the Fitzroy Flats.

“It was frontline stuff and a real kaleidoscope of life,” she says. I realised there that life is not fair but you do get the chance to make a difference.”

In 1990 Robyn undertook post-graduate study in Family Therapy while working part-time. She also had her fourth child during that period.

“It was busy,” she laughs. “But I’ve been lucky. I’ve had a really good, hands-on husband and lots of family support and a supportive parish community at Northcote. So we juggled and we made it work. And my kids, and now grandchildren too, have been a real joy. I’m very lucky.”

The next 14 years were spent at the Bouverie Centre in Melbourne, a Centre of Excellence for Family Therapy, which is part of La Trobe University.

“We developed innovative models where you promote recovery from trauma,” she says. “It was Family Therapy based on a relational approach, where you ask, ‘What’s the ecology around this person who is troubled and what can we do about that?’. I loved it.”

Somewhere in there, says Robyn, having completed her Masters Degree in 1997, she had her fifth child and a few years later the family took a four month trip around Australia with all five kids, which she describes as “the best experience”.

Some time in private practice and teaching at Melbourne, La Trobe and Monash universities followed, before Robyn began her doctoral studies and then, in 2006 was appointed the first Principal Practitioner of Victoria’s Department of Human Services.

“My time there was a rich time of reform,” she says. “It was a leadership role in child protection, family services and out-of-home care during a period where there was an increased focus on the impact of trauma and how we need to work therapeutically with children in out-of-home care and also focus on early intervention.”

After taking three months off in 2014 to walk the Camino Way across Spain, Robyn returned home to a position as senior consultant with the Royal Commission into Institutional Responses to Child Sexual Abuse.

“It was a fascinating time,” she says. “All these years of working with families and seeing the damage done by sexual abuse and here, finally, the big end of town was taking notice. It was an important national process of healing and recognition of what’s gone on and the impact of it.”

Robyn took up her current role as CEO of MacKillop Family Services in July 2016.

“My role is one of practice and organisational leadership,” she says. “And of course, a key component is to ensure that we, as a faith-based agency, demand a commitment to the learnings of the royal commission.”

The three years since she arrived has been a period of significant growth, with a doubling of staff and increase in services and programs.

“We’ve also had five other agencies join with us,” Robyn says.

“It’s a very big responsibility. We look after about 700 kids on any given night, either in residential care or foster care. We also run schools for kids who’ve been excluded from school, where we can bring our knowledge and understanding of trauma into education.”

Robyn says the grim reality of working with families and children affected by trauma and violence over so many years can take its toll, but her passion to make a difference is what drives her.

“You’re not human if it doesn’t affect you,” she says. “But I’m so busy doing something about it and getting very good outcomes and that helps to balance it out.

“I’m also really inspired by the faith and values of the three religious figures who are at the heart of MacKillop Family Services and the agencies which have built it up – Mary MacKillop, Catherine McAuley and Edmund Rice. Their values are totally in sync with the faith and Gospel values that have been foundational in my life.”

Robyn says it is her aim to ensure that MacKillop Family Services’ practice in family care “is good and consistently good”.

“These kids and families are so hurt and so harmed. It’s the least we can do.”

This original article was written by Debra Vermeer.