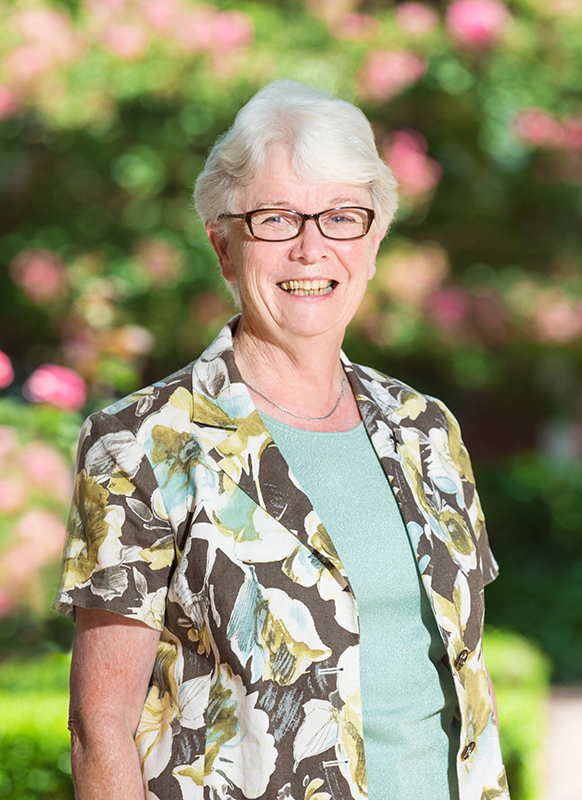 This article was written by Debra Vermeer

Just when retirement was beckoning for Sister Catherine Ryan rsm, she was instead asked to take on the role of Chancellor for Ministries in the Parramatta Diocese – a position she sees primarily as a ministry of encouragement and support.

“I’m constantly amazed at how committed, dedicated, creative and innovative our people are in the work they do.”

The role as Chancellor is the latest chapter in a life filled with twists and turns for Catherine.

Born in Liverpool, England, where her father, an Australian serviceman, married her mother during World War II, Catherine returned with her family to Sydney as a youngster, where she grew up the oldest of five daughters.

Her father died from Tuberculosis, which he contracted during the War, when she was 13. Her youngest sister was just over one year old.

“My mother had already had to become a very good manager with our reduced finances because of Dad’s illness and inability to work and that of course continued when he died,” Catherine says.

“She was a wonderful, courageous woman, leading a little band of women in our household. We learnt to be very independent and to rely on our own resources.”

Catherine was educated by the Josephite Sisters at St  Felix’s Bankstown up to Intermediate Certificate level and then in 1958 went to Our Lady of Mercy College in Parramatta, a Sisters of Mercy school, to complete the Leaving Certificate.

She had already encountered the Sisters of Mercy in Orange in Central Western NSW and they had made an impact on her, through their warm care for the elderly housebound people they visited, including her aunt.

“They had a warm, human connection which drew me in a bit and when I came to considering a vocation, I thought of them. I also liked the women who taught me and I wanted to be one of them,” she said.

Catherine joined the Sisters of Mercy in 1960 and over her 58 years of religious life, has enjoyed a variety of ministries beginning with teaching in western Sydney primary schools. After some years, she gained credentials in Educational Administration and joined the Sydney Archdiocese Catholic Education Office as part of a small team developing leadership programs for primary school principals.

She went on to work as a consultant to primary schools in western Sydney for a period and then served as Principal at St Patrick’s Blacktown, Our Lady of Fatima, Caringbah, and St Michael’s Baulkham Hills, a role she loved.

At the end of 1990, Catherine felt it was time to move on from St Michael’s and her life took yet another a significant turn.

“It was at the time of the big HIV/AIDS crisis,” she says. “And I felt called to be there in some capacity.”

After completing her Clinical Pastoral Education at Royal North Shore Hospital, Catherine was approached by Parramatta Bishop Bede Heather to take on the role of Chaplain to people and families affected by HIV/AIDS.

“The six years I spent in HIV/AIDS ministry were so enriching,” she says. “It was an altogether different scene from running a primary school, that’s for sure.

“I met some wonderful characters and it was such a privilege to walk with people and families in the pain and mystery of it all.”

After six years, Catherine says the “accumulated grief of it all” prompted her to take a year of renewal, which she spent in Jerusalem, Ireland and other parts of Europe.

“At the end of 1997 I came back quite refreshed and joined the parish team at Holy Family Parish, Mount Druitt, which was another turn in my ministry,” she says.

“It was such a wonderful ministry to be involved with. We had a great parish team. It was what they called a community-based church, rather than a church-based community and the people themselves were encouraged to be involved in finding solutions to some of the quite serious social problems in this largely housing commission community with a big indigenous population.

“I learnt a lot about homelessness. I learnt a lot from the indigenous community. I was so enriched by walking with these people, by their dignity and resilience.”

For 12 years, from 2004 onwards, Catherine was part of the leadership team for Sisters of Mercy Parramatta, and at the end of that period was elected Congregational Leader for another six years, a period she describes as “a vocation within a vocation”.

Finally, Catherine passed those leadership roles on to others, as she approached 75, was looking towards a more relaxed pace.

“I thought, now it’s time for the tasks of the autumn years,” she says. “But then arrived a new Bishop and Bishop Vincent Long invited me to take up this role in the Curia and become Chancellor of Ministries.

“He was anxious to have a woman on his team and I had felt that one of the tasks I would attend to in my autumn years was to try and advance the role of women in the Church. So, this seemed an invitation to do something in some way towards that.”

“I think my greatest joy is in the commitment and energy of the leaders who work in our ministries. It doesn’t matter whether it’s organising sacramental programs or educating people to carry on the faith, just the energy they have creates such joy and I love sharing in that joy,” she says.

Catherine says she is pleased to work in a Diocese which takes seriously the need to have women in leadership roles such as hers, but says there is still much work to be done across the broader Church.

“There is always a great ambiguity between the Church affirming the dignity and worth of women and the reality of where women are in the Church,” she says.

“Different women take different approaches to this dilemma, but I’m choosing to stay at the table, so to speak. That’s where I hope we can make a difference, by remaining in respectful dialogue and continuing to work towards the reality of women having a real voice in the Church and being recognised as having been created truly equal.”