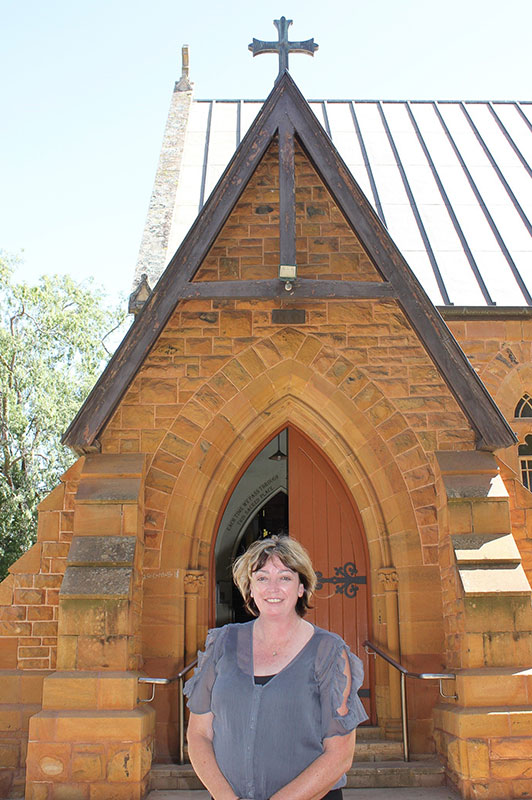 When Kath Nadin, a long time Catholic educator, was asked to help the freshly appointed Bishop of Wilcannia-Forbes settle into his job, she soon discovered she would wear many hats in her new role.

“When Bishop Columba first arrived, there was just he and I in the office,” she laughs. “So we were both answering the door and picking up the phone and everything else for the first few weeks.”

Her arrival also coincided with the retirement of the Bishop’s Secretary, so when Bishop Columba Macbeth-Green arrived, it was a time of rebuilding in the Bishop’s Office of the vast bush diocese in western NSW.

“I was very fortunate in those early days to have lots of support from the previous financial administrator as well as a number of diocesan priests,” Kath says.

“But it was still a huge learning curve for me.”

Kath was born and bred in the Central-West town of Forbes, where the Diocesan offices are located, and grew up in a Catholic family, attending the local Catholic schools before heading off to Canberra, to what was then the Signadou Teacher’s College, now part of Australian Catholic University.

“When I finished my diploma, I headed out to Cobar for my first teaching appointment,” she says. “I have always taught in this Diocese.”

After Cobar, Kath was at Narromine for about 11 years as Religious Education Coordinator and then a period working for the Catholic Education Office in the area of religious education curriculum and assisting recent teaching graduates in the local Catholic schools.

“I did a lot of travelling in those days, to assist teachers with religious education,” she says.

Her time at the CEO was interspersed with time teaching in the country towns of Trundle, Peak Hill, Parkes and Forbes, as well as having a family.

Kath was back at the CEO when Bishop Columba’s appointment was announced and she was seconded to the Bishop’s Office to help him settle in.

After a period working as Acting Financial Administrator of the Diocese, Bishop Columba appointed Kath as Chancellor.

“But the role of Chancellor was only one of the small hats that I wore,” she says. “It was dealing with parishes on everything really, including Workplace Health and Safety, financial matters, property, professional standards and working with priests. In a country diocese you wear many hats.

“I didn’t look for this job, it just fell into my lap, but I see it all as part of God’s plan for me, part of my ministry and vocation, so I just took that direction for a while.”

Kath says women have always held an important place in country communities and within the Diocese of Wilcannia-Forbes.

“And we have a wonderful Bishop. We’re very fortunate. He’s terrific to work with and very supportive.”

This year Kath returned to the CEO in the role of RE Education Officer for three days a week, while working in the Bishop’s Office two days a week on Professional Standards and Integrity of Ministry.

She says she’s pleased to be back in education, but “amazed at the whole new skill set” she learnt as Chancellor as well as the people she met.

“Out here the distances are vast, but you get to know people in every town you go to,” she says.

“That was a really special part of my years as Chancellor, the people you meet either over the phone or in person, the parishioners. It’s been a very rewarding experience to hear their stories and be invited to be part of their everyday life. A privilege.”