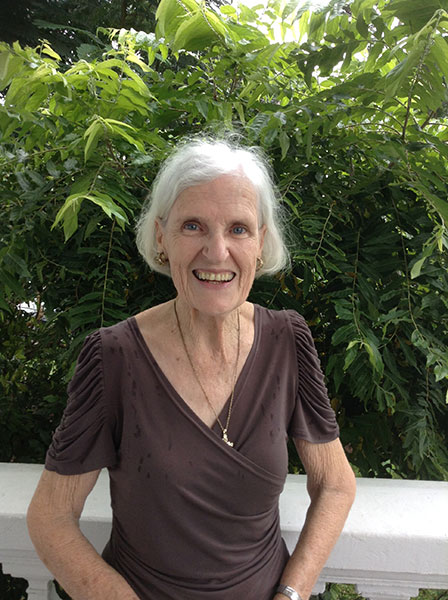 Being Chancellor of the Cairns Diocese, which extends from the outback to the islands in Far North Queensland, has its challenges, but is primarily about helping and supporting one another, says Eileen Lander.

“This diocese runs all the way to the Northern Territory border, across to the coast and out to the islands, so there are lots of small communities and lots of different needs,” she says.

“But I think we’re pretty good at helping and supporting one another.”

Born and bred in Cairns, Eileen was brought up in a Catholic family and educated in local Catholic schools before taking up a scholarship to study teaching in Brisbane.

After graduating, she taught at Cairns State High School for three years before accepting other appointments in Maryborough, Brisbane, Longreach and the Northern Territory.

“With all my travels for teaching, people encouraged me to go even further, and so I did. I travelled to England and taught there for a while in the 1960s,” Eileen says.

“It was on my way back from there by ship that I met my husband, Arthur, a Canadian.”

Upon her return to Australia, Eileen taught Science, Maths and Religious Education in a number of different Catholic schools around Brisbane, before returning to Cairns to teach at St Monica’s College, a school run by the Sisters of Mercy.

About six months into her time at St Monica’s, the Principal left and Eileen was appointed first as Acting Principal and then Principal.

When retirement beckoned, Eileen continued to do volunteer relief teaching before becoming involved in the work of the Diocesan Tribunal.

“One of the nuns I knew worked in the Tribunal, so she got me involved with that,” says Eileen.

“Eventually I went down to Sydney and did the studies in Canon Law and after she died, I found myself looking after the administration of the Tribunal.”

It was during her time at the Tribunal that Eileen’s beloved husband Arthur died, so her work with the Diocese became a lifeline in terms of a focus for her life. She has also had an ongoing involvement with the Sisters of Mercy, sitting on the board of Mercy Ministries Far North Queensland.

After taking a holiday to visit family a few years back, Eileen returned to find that she had been appointed Chancellor of the Diocese.

“I didn’t believe them at first,” she laughs. “But when the Bishop (James Foley) returned from his January holidays he confirmed it, and so here I am.”

Eileen continues her work in the Tribunal along with the Chancellor’s role and says that in a tourist area like Cairns, much of her work involves helping out priests in attaining and providing all the necessary documents for marriages to take place.

“People come from overseas and other places and there’s a lot of documentation that’s required,” she says.

She also takes carriage of administrative tasks that come along to do with things such as the National Church Life Survey and regular Mass counts, as well as pastoral gatherings and synods, for which she works with representatives from the different parishes.

“There’s so much going on,” she says. “For instance, there’s been a tremendous growth in Aboriginal ministry over the last few years.

“I just try to be a support and to be there for people in need and others do the same, they help and assist wherever they can.

“There are still a lot of people who have backed off from being a part of the Church community, but often they can still be encouraged to get involved and celebrate the big moments in their lives.”

Eileen says women are “very involved” in leadership in the Cairns Diocese, in areas like finance, youth ministry and other pastoral areas.

“There are a lot of people working in different areas, even in small ways,” she says.

Asked what she loves about her role as Chancellor and in the Tribunal, Eileen is quick to reply.

“It’s the people I get to meet,” she says. “Especially in the Tribunal, the people I meet, many of whom are going through a difficult time in their life, they are absolutely amazing and they have made a big difference in my life.”