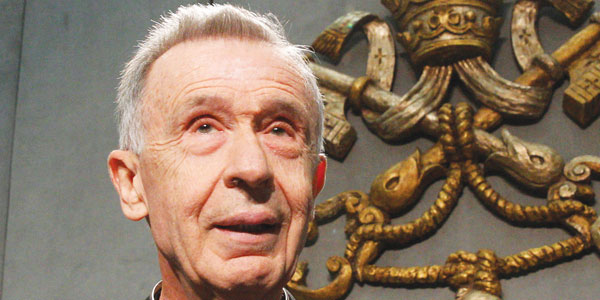 At the Gregorian University, where I taught theology between 1973 and 2006, I valued Luis Ladaria as a teacher, writer, colleague, and vice-rector. He stood tall as acting dean of theology when the incumbent died suddenly. But, with all respect to his person, record, and his present office, I want to raise some questions about his article in L’Osservatore Romano on 30 May.

Cardinal-designate Ladaria, Prefect of the Congregation for the Doctrine of the Faith, recalls that when Pope St John Paul II taught in his apostolic letter, Ordinatio Sacerdotalis of 22 May 1994, that priestly ordination is limited to male Christians, he did not teach ex cathedra. John Paul II was not solemnly defining a revealed doctrine on his own authority as infallible. Instead, the Pope appealed to the constant and unanimous teaching of Catholic bishops around the world.

John Paul II invoked what has been called the infallibility of the ordinary, universal magisterium, which was upheld by the Second Vatican Council: according to the dogmatic constitution on the Church, the whole college of bishops in union with the Pope teach infallibly when they agree about some revealed truth “to be held definitely and absolutely” (Lumen Gentium, 25).

Archbishop Ladaria insists that the ordinary, universal magisterium has definitively excluded the priestly ordination of women. But how does he know this? Canon 749.3 of the 1983 Code of Canon Law states that “no doctrine is understood to be infallibly defined unless it is clearly established as such”. Is it a clearly established fact that the bishops around the world have been unanimous and constant in teaching that women should be excluded from priestly ordination?

I do not know of any consultation that has established the unanimity of the bishops’ teaching on this issue. The Second Vatican Council might have featured such a consultation. But the bishops at the council were never asked the question: is it a matter of revealed faith that the Church has no authority to admit women to priestly ordination?

To establish clearly that the bishops have taught constantly – that is to say, through unbroken teaching since the origin of the Church – that women cannot be admitted to priestly ordination would require a thorough study of the history of how Catholics have addressed this question since apostolic times. I have never heard that such a study has ever been completed. The possibility of clearly establishing a constant line of teaching on this question seems a forlorn hope.

Archbishop Ladaria speaks of “the deposit of faith” supporting the exclusion of women from priestly ordination. The deposit of faith includes all that God revealed through Christ for our salvation, considered as a treasure entrusted to the Church to be preserved, interpreted and proclaimed faithfully to all people until the end of time.

But can we claim that the divine revelation mediated through Christ and attested by the inspired Scriptures excludes women from the ordained priesthood? The Pontifical Biblical Commission reported in April 1976 that “the New Testament by itself alone” does not settle  “the possible accession of women to the presbyterate”. The Biblical Commission did not find in the New Testament a revealed mandate rejecting the priestly ordination of women.

Archbishop Ladaria believes that the accounts of the Last Supper disclose the decision of Jesus that only men should be admitted to the ordained priesthood. Jesus did not call any women to be members of the Twelve. It was these men, precisely as men, whom Jesus ordained to priestly ministry.

At the Last Supper, through his priestly words and gestures, Jesus instituted the Eucharist. He invited his disciples to share, by eating and drinking, in a covenant of reconciliation, the new covenant that would bind them to God and to one another. But were there only the Twelve present at the Last Supper? Even if that were so, what can we conclude apropos priestly ordination?

Should we insist on the Last Supper as the defining moment in the access of these 12 men to an ordained priesthood? None of the four Gospels speak of Jesus imposing hands on the Twelve and calling down on them the Holy Spirit. New Testament scholars note the fragmentary nature of the evidence for three “orders”, of “overseers”, “presbyters”, and “deacons”, emerging in early Christianity, and preparing the way for bishops, priests, and deacons, ordained through the imposition of hands and the invocation of the Holy Spirit.

Supposing that only 12 men attended the Last Supper and supposing that Jesus said to them something like “Do this in memory of me”, may we conclude from this that he meant: “And only males like you can preside at the Eucharist”? The Twelve were all circumcised Jews. But that did not stand in the way of the Church calling innumerable uncircumcised Gentiles to be its ordained leaders.

In placing such weight on the lasting significance of the maleness of the Twelve who, allegedly, were the only disciples of Jesus present at the Last Supper, Archbishop Ladaria revives an argument used more than 40 years ago by the CDF in its document Inter Insigniores (13 October 1976). If limiting priestly ordination to men is to be recognised as an unchangeable truth of Catholic faith, it needs a more effective defence than this.

This article was written by Gerald O’Collins was originally published in The Tablet. Reprinted with permission.

Gerald O’Collins SJ, an Australian, was a professor of theology at Rome’s Pontifical Gregorian University for more than 30 years. His latest book is Lost in Translation: The English Language and the Catholic Mass.

Source: Is limiting priestly ordination to men an unchangeable truth of Catholic faith