Catholic women respond to the Spirit 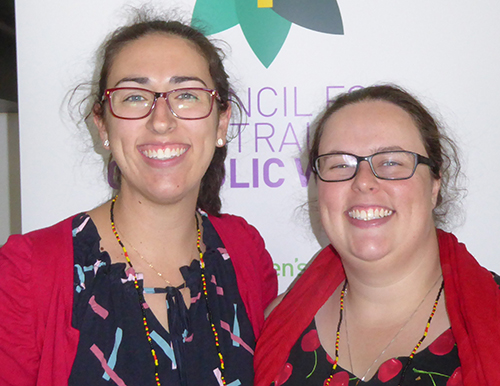 This article was written by Debbie Everett and first appeared on the ACBC Media Blog, 24 February, 2019

Catholic women have been urged to add their voices to help shape the future life and direction of the Church through the Plenary Council 2020 Listening and Dialogue process, which ends on Ash Wednesday.

The call to action was made in Adelaide over the weekend at the “Stirring the Waters: Australian Catholic Women Responding to the Spirit” colloquium, where more than 160 delegates gathered to be part of frank and open discussion, prayerful discernment and planning.

In the opening liturgy, delegates symbolically added water from their homes to represent this unique gathering and in Sunday’s closing prayers, those waters were distributed for the women to carry the nourishment of the colloquium back to their homes and parishes.

The colloquium encouraged wide-ranging discussions and workshops looking at leadership, the involvement of women in the Church, the experiences of migrants and victims of domestic violence, the stories of Aboriginal and Torres Strait Islander women, the voices of LGBTIQ Catholics and the need to care for creation.

Council of Australian Catholic Women chair Dr Trish Madigan OP said: “I think what we’ve witnessed at the colloquium is the commitment and passion that women have for the life of the Church and for their own life as women of the Church.

“They want to see transformation in the Church to recognise women’s gifts and ability and their identity as baptised Christians.”

Geraldine Hawkes, ecumenical facilitator of the South Australian Council for Churches, said the colloquium revealed that every woman matters and every story is important.

She urged women to: “Engage and join the (Plenary) process, enjoy it and find it as a place where we can move forward together as a Church.”

“The great temptation is to lose faith because we think nothing can change,” she said.

“As people in the Church, we think to ourselves ‘it can’t change’. But unlike a political movement, we do not have to do this out of our own imagining. It is of the essence of faith to trust that God is working in this with us.

“Yes, we will work sometimes to our last shred of energy we have, but in the end we are sustained because the work of transforming the Church and transforming Australia rests on God’s own self; God, who has limitless reserves of love and compassion and mercy.
“If we embark on the synodal journey, we need to constantly learn each day where to push, where to trust my companions on the road and where to leave it to God.”

Reflecting on the 20th anniversary of the landmark research project Woman and Man: One in Christ Jesus, Archbishop Christopher Prowse, chairman of the Bishops Commission for Evangelisation, Laity and Ministry, acknowledged the frustration felt by many women wanting to have a greater role – not only in the Church but in society.

“I also want to mention to you the importance of the Spirit moving amongst us, particularly with the charism of women in the world and the Church,” he said at the opening session.

“It’s certainly one of the great signs of the times of women surely that this is happening all around the world in society and all around the Church and the churches.

“It’s great to have vigorous debate. I always like to think of Pope Francis’s advice to us, and the Church in general right at the moment, and particularly in the light of the Plenary Council now in Australia, to listen with humility and speak with courage, one needing the other.”

Archbishop Prowse continued: “I’d like to see more and more women involved in this prophetic dimension and evangelisation. I’m looking forward to hearing what some of the resolutions are for the next 20 years.”

National Centre for Pastoral Research director Dr Trudy Dantis led a workshop on “Women and Leadership in Australia”, explaining that the Catholic Church employs 220,000 people in various agencies across Australia, with more than 77 per cent of that workforce made up of women.

More than 70,000 women work in education and more than 60,000 in health and aged care, she said, with more than 8000 women employed in Catholic parishes and dioceses.

“Of those employed, 61 per cent were in professional services, 80 per cent in administrative or support roles and 64 per cent in pastoral work and mission. Lay leadership is significant for the vitality of the Church,” she said.

Research also showed that young women wish to participate more in Church activities and groups, but they’re not sure how to get involved.

“That is the challenge,” Dr Dantis explained.

At the conclusion of a moving listening and dialogue session, the women added their thoughts and themes for a submission to the Plenary Council.

Council facilitator Lana Turvey-Collins said more than 70,000 people have shared their stories as part of the process through a range of mediums, including artistic, beautiful, prayerful submissions.

“People show up because they want to be part of God’s mission,” she said.

“There are hurdles to jump and there are really sharp turns to be made.

“There are structures to change and there is culture to change, but it is only possible if everyone believes that we have a lot to offer and that we can drive God’s mission into the world and have a great impact on Australian society.

“I treasure and honour the sorrow and hurt that I have heard and it travels with me. It makes my heart so full that the tears spill out of my eyes.”

She said every one of the submissions were in the process of being analysed by the ACBC’s National Centre for Pastoral Research to help form themes for the next phase of the Plenary Council process: Listening and Discernment.