A young woman’s take on “Christ is alive” 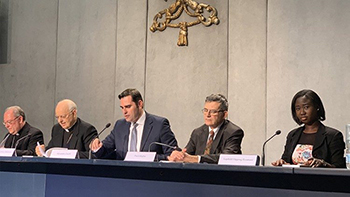 Amongst the speakers on hand to present the papal document and to answer the journalists' questions, was 25-year-old Laphidil Oppong Twumasi, who took part in a preparatory pre-synodal meeting to draw up the preliminary texts upon which the Synod of Bishops on Young People, the Faith and Vocational Discernment based its work.

Laphidil, a student in Biomedical Engineering, is also a youth minister of the Ghanaian community in the Diocese of Vicenza in northern Italy.

She told Linda Bordoni she was happy to be able to confirm that the final document really stems from the all the contributions made by young people before the actual Synod and that its language is fresh and youth-friendly.

Laphidil, who was present in Rome last year to participate in the preparatory meeting that produced a pre-synodal document spelling out the priorities and concerns of young people, their faith and their relationship with the Church in the lead-up to the Synod of Bishops, said that something that really emerged was that the youth generally perceive “a vast difference between the ‘young Church’ and the ‘adult Church’, and this concern was clearly stated in the final document.

Part of the problem, she said, lies in the official language of the Church, and she pointed out that “the youth don’t really understand theological terms” and idiom.

However, Laphidil added, to see the way this document is written, in the form of a letter, “it felt like talking to someone who was close to you, like a father giving his advice”.

“Seeing these words in an official document surprised me in a good way, and it made me realize that the things we wrote in the preparatory document were in fact taken into consideration” she said.

Is the document too long?

Laphidil conceded that it’s a long document (299 points divided into 9 chapters); but said she thinks – and she hopes – that young people will in fact actually read it and engage with it “because, it’s an official document of the Church and it includes a lot of issues that need to be talked about”.

Its style is also helpful, she said, so “if you take some time, and not worry about learning things by heart” it reads as a letter to the youth, and everyone is going to find something in it that is related to him or her.

Asked whether the most relevant themes that had been identified during the pre-synodal meeting were included in the document, Laphidil said that for her, the issue of women, and particularly of young women in the Church was the most important.

“I was glad to see this issue taken into account in the synodal document and I was happy to see references and quotations of that document in the Exhortation” she said.

Over to the youth

Concluding her presentation at the press conference, Laphidil said it is now up to Catholic youth to “get up and take action”.

The way she is doing just that, she said, in her role as an ‘animator’ in the Ghanaian group in her diocese and in her parish of residence, has been by trying to influence her peers throughout this period.

Since her work in the pre-syondal group last March, she said, she has taken her community through the process telling them what was going on, what was accomplished, and how young people were also involved.

In her role as youth minister, meanwhile, she said the young people in her group have already started reading the synodal document, they are talking about the issues that are nearer to them and they are expressing their views while trying to implement the indications in their daily activities.