Mary Magdalene- An Icon for Women in the Australian Catholic Church 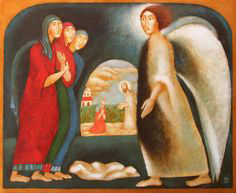 An original essay by Erin Gillard

Women and their absence from ordained ministry, positions of leadership and decision making within the Catholic Church has been a topic of tension for the past several decades. This essay aims to shine a light on the critical role of one very important woman, Mary Magdalene, in the history of Christianity and how her testimony sets a precedent for the important role women should play in Catholicism today. More specifically this essay will discuss and reflect on the implications for women and the Australian Catholic Church in the current climate.

Mary Magdalene’s crucial role in the proclamation of the Risen Christ to the world sets a scriptural foundation for the important role women can and should play in the Catholic Church. Critically analysing John 20: 1-18 (NRSV) steps us through the awakening Mary Magdalene experiences in coming to understand the true meaning of Jesus as the Messiah, Christ crucified and now resurrected. Three key figures play a role in the resurrection narrative in the Gospel of John; that of Mary Magdalene, the Beloved Disciple and Simon Peter. The focus of this analysis however will be on the role of Mary Magdalene (MM).

The writer of the Gospel makes it clear from the outset that something monumental is about to take place. The use of the words ‘still dark’ could indicate to the audience that the followers of Jesus are still in mourning following his death just two days prior. The light of the world, Jesus, has gone. It potentially points to the dawn, the morning to come, the light of the world through the resurrection of Jesus which will be encountered in this passage. Francis Moloney argues that this darkness refers to a state of unfaith and the inability of the disciples, in particular MM, to understand Jesus' death as the fulfilment of the Scriptures."

After death, Jesus body is Jeft in the tomb, as witnessed by MM because preparation day was at hand. It is significant that MM was one of the last to see where Jesus was placed as it therefore adds authority of her witness as the first one to arrive before the dawn on ‘the first day of the week’. MM eagerness and faithfulness to Jesus is evident by her movement to the tomb before the dawn. Upon seeing the open tomb MM runs with urgency back to Peter and the Beloved disciple to recount her experience. She is distraught at the thought of the missing body of the Lord saying to them, “ They have taken the Lord out of the tomb and we do not know where they have laid him”. It is obvious here that she is yet to understand that Christ was to be resurrected. Some scholars note here that MM had yet to consider the work of God in removing the stone instead she worried that those who crucified Jesus had taken his body.' It would seem that MM follows the disciples back to the tomb while they investigate her claims although this is not stated in the scripture. After the disciples encounter the tomb they return home. MM remains outside the tomb weeping just as Jesus did for Lazarus.' In her mourning she looks into the tomb, experiences an angelophany and the two angels speak to her', The angels indicate the presence of God, his participation in the events of the resurrection and his words he speaks through the Angels, "Woman why are you weeping?” MM responds announcing for the second time what she did in verse 2. However she replaces ‘The Lord’ for ‘My Lord’ in the second response making it truly personal for her.

MM then encounters the Risen Christ for the first time in his resurrected body however she does not recognise him. Jesus asks MM for the final time why she is weeping and she gives the same answer as in verses 2 and 13. She mistakes Jesus for the gardener and asks to be reunited with Jesus’ missing body. This could indicate that Jesus’ appearance may have changed or that she is yet to comprehend the resurrection. Interestingly scholars have seen a potential link between MM’s mistake of Jesus as the gardener to the Garden of Eden. One man (Jesus) and one woman (MM) together once more, in a renewed and restored creation/Garden through the redemptive powers of the resurrection.

Jesus calls her by name, “Mary”, and she then comes to an awareness of the Risen Christ standing before her exclaiming, ‘Rabbouni’, meaning teacher. MM's comprehension of Jesus is instant when he calls her by name and thus aligning himself as the Good Shepherd, “I know my own and my own know me... they will listen to my voice (John 10: 14-16).”

Throughout the passage MM is fixated on Jesus’ earthly body and trying to find it. The only dialogue of MM in this passage up until now, on three seperate occasions has been about her concern for finding the body of her Lord'. Her fixation continues as she appears to reach for Jesus standing before her. Even when she came to realise Jesus in his resurrected form, she still clings to his body, to his earthly form and he warns her against this: “Do not hold onto me”. Jesus goes on to explain that the resurrection is not complete yet; “Because I have not yet ascended to the Father.” He then commissions MM to be the first person to proclaim to the world the Risen Christ. “Go to my brothers and say to them, ‘I am ascending to my Father and your Father, to my God and your God”. As scholars attest the words used in Jesus’ commission to MM indicate a shift in the relationship between God and his people. That the relationship has been redeemed through his death and resurrection. As Clark-Soles describes “[MM] is charged with announcing.. that God, Jesus and Jesus’ followers are intimately, inseparably related.”

MM immediately goes and proclaims the Good News of the resurrection to the disciples and therefore the world; “I have seen the Lord”. MM makes a full confession of her belief in Jesus, moving from a partial belief, referring to Jesus initially as ‘Teacher’ to ‘Lord’ when proclaiming to the disciples. Moloney identifies that MM’s language changes throughout the passage highlighting her transformative journey of faith. MM refers to Jesus’ dead body respectfully as ‘ho kyrios’ until she comes to the full knowledge of the resurrected Christ”. She then uses ‘ton kyrion’ when proclaiming to the disciples “I have seen the Lord”. She is the first person to witness to others the Risen Christ. She becomes the Apostle to the Apostles. As Schneiders outlines MM is the first true Apostle. She experiences the first Christophany, she is called by name and she is given a commission to preach the Gospel which she undertakes faithfully. Clark-Soles names MM the first post-resurrection evangelist and the Samaritan woman the first pre- resurrection evangelist. Clark-Soles goes on, “She is the first Christian preacher insofar as she proclaims not only her own personal experience of the resurrected Christ but transmits “these things he had spoken to her””

It is no accident that MM was the first person Jesus revealed his resurrected self to. To be the first to “announce the exaltation of Jesus and its salvific effects to the disciples”.

MM, the scholars attest, was a devout follower of Jesus, who journeyed with him through to the cross, the tomb and then the resurrection. She was the first to truly understand the Gospel message. Her faithfulness was rewarded. Unfortunately her legacy today is a far cry from what it should be, now misunderstood by many to be a sinner and prostitute. MM was a leader within the early church as evidenced by how she is referenced in every Gospel as Mary Magdalene, without connection to a male and listed as the disciples were.

The fact that God chose MM to be the first to proclaim the Risen Christ is evidence enough to highlight the importance of women leading, teaching and preaching in the church that Jesus himself established. Jesus was counter cultural in his associations with women throughout his ministry and perhaps never more so than when he chose a woman to be the first to proclaim the resurrection. Her testimony, as well as the other great women in the Gospel of John, highlight the fact that Jesus called women into full discipleship and ministry. He chose a woman of great faith and devotion to share the moment the world changed. She was and is today considered the Apostle to the Apostles. Her significance wasn’t lost on the early Christian churches and communities.

It is through Man’s will, not God’s will, that women have been sidelined in leadership, ordained ministry and decision making in the church over the centuries. God always had men and women, male and female side by side to complement the other. He chose this too for the establishment of the Catholic Church by assigning Peter to build his Church (Matthew 16:18) and commissioning MM to be the Apostle to the Apostles.

The Spirit is stirring up the hearts of Australian Catholic women. The call to give leadership the feminine voice it needs is on the hearts of the young people as we saw most recently at the Synod for Young People, the Faith and Vocational Discernment’. It is now on the hearts of many within the hierarchy of the Catholic Church including Bishops, Cardinals and the Pope. Early reports on the final synod document indicate that Synod Father’s consider women’s leadership within the church is a ‘duty of justice’. Furthermore MM has been named as the icon for the synodal church. It is with her same passion and enthusiasm to proclaim the Risen Christ that we begin the dialogue and discussions required to see this as a lived experience within the Catholic Church today and into the future.

In Australia, in particular, we have entered into a three year process of dialogue, discernment and action in the Plenary Council 2020. Discerning what God is asking of us and our Australian Catholic Church. The role of women in positions of leadership and decision making will be an issue of significant importance to this Council. In order to consider what increasing leadership and decision making opportunities for women may look like in our Australian context we need to first determine what ministries and duties need to be undertaken by the ordained or what do not. Opportunities for women’s involvement that already occur within various parishes and dioceses in Australia should become the rule rather than the exception. Opportunities such as:

Mary Magdalene is an important role model for women in the Australian Catholic Church. Her testimony and proclamation “I have seen the Lord” heralded in a turning point for all of history. Mary Magdalene was the Apostle to the Apostles, a foundational leader and preacher within the early Christian churches despite the cultural norms limiting the participation of women in society. A devout, faithful woman who believed and understood Jesus and his mission. Like Mary Magdalene on that first Easter morning full of joy and anticipation, may we, as Australian Catholic women, charge towards the dawn of a new era, to announce and proclaim the Gospel. Hopeful that the discussions, dialogue and outcomes of the Plenary Council may open the opportunities for Australian Catholic Women, afforded to us in our baptism, to lead the church however it needs and whatever that may look like into the future.