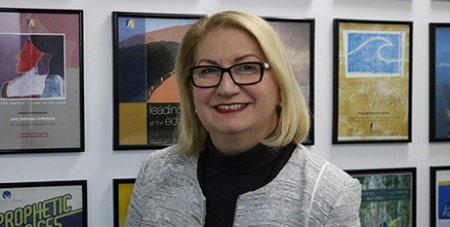 This article originally appeared on the ACBC Media Blog on 20 June 2019.

CHA board chair, Paul Robertson, said while he was sorry to see Ms Greenwood leave, he was grateful for her contribution and wished her every success in her future career.

“Suzanne is a fierce advocate for expanding access to health care for all people and has led CHA expertly, and always with the best interests in mind of those who are cared for in Catholic hospitals and aged care services,” Mr Robertson said.

“Suzanne has also advanced the Church’s mission as members came together in a spirit of communion and cooperation to respond to the introduction of voluntary assisted dying in Victoria. By building research evidence of Catholic palliative care services, CHA has demonstrated strong leadership and action on improving end-of-life care in response, and CHA will continue to spotlight this issue to ensure palliative care remains on the government’s agenda.

“Since commencing with CHA in October 2014, Suzanne increased the policy and mission support capacity of CHA, improved our governance model through undertaking a governance review, launched the Ministry Leadership Program in Australia and represented our member services on the International Confederation of Catholic Healthcare Institutes,” Mr Robertson said.

Ms Greenwood said she was grateful to CHA for the opportunity to serve the Church.

“The good works of the membership in achieving their mission is remarkable and so to work with them, and alongside such a supportive Board and a capable and committed staff team, has been a blessing.

“It’s been an honour to have the unique opportunity to help shape national health and aged care reform on behalf of CHA members, who together form the nation’s largest, non-government provider grouping of health and aged care services. Catholic Health Australia will continue to advocate strongly and fairly on behalf of our members to secure Government support on issues that affect all Australians, such as affordable healthcare, access to aged care and improved end-of-life care.

A process to appoint Ms Greenwood’s successor has been commenced.