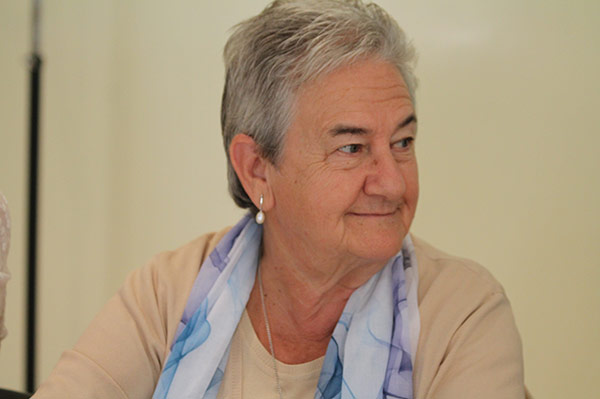 This article was written by Inés San Martín and first appeared in Crux on 15 June, 2019

ROME - Last week, the Vatican announced that Pope Francis added four women as Consultors of the General Secretariat of the Synod of Bishops.

It was the first time women were appointed to the body, which was created in 1965 and as the name indicates, is traditionally male.

Among them is Spanish Sister María Luisa Berzosa, the president of Faith and Joy, an international federation dedicated to education and the promotion of social welfare.

Speaking with Crux, Berzosa said that she believes women need a greater visibility within the Church, and that necessary steps are being taken, but they are “small” steps.

Despite the pace, she defined herself as an “optimist,” and as long as the Catholic Church continues to “move forward,” she’s in no rush.

She believes that, ultimately, there will be no roles within the Church that are inaccessible for women, including the priesthood, but thinks that won’t happen until further down the line.

“Things would have to change,” she said. “But I think that if steps are taken, processes are made, responsibilities are assumed, the [ordination of women] can be at the end of this process, without much ado, as a natural progression.”

“It is true that when I accompany a person spiritually, I can’t hear their confession, and I have to call somebody else to lead the liturgy,” Berzosa said. “And sometimes I wish I was able to do that.”

Berzosa spoke with Crux on Friday while she was in Rome for the Faith and Joy assembly. What follows are excerpts from that conversation.

Crux: Did you expect to be appointed to the Synod’s permanent commission?

Berzosa: Absolutely not. I participated in the Synod of Bishops on the Youth and Vocational Discernment last year, and I had the opportunity to travel through Spain to share that experience. But when that was over, I though so was my synodal experience. I didn’t even know that there was a permanent commission of the Secretariat of the Synod!

Did you give any memorable speeches during the 2018 synod, or do you know if you were chosen for something you said or did last October while the meeting took place in Rome?

No. I participated in the Synod as a member of the commission I was assigned to, that of experts and consultants. Like all my colleagues in that commission, I worked very hard, because there was a lot to do every day. It was a great commission to work in. We worked hard, but we were very much in sync.

But since there were very few women at the synod - 12 of us outside of the young people - we were very significant because we insisted on being visible. We made ourselves heard, made a “mess” - as Pope Francis asks us to do.

How significant is it that the synod’s permanent commission now has four women, three religious and a laywoman?

I want to read it as a small sign, a small step in the path to give women more visibility, to include their voices - a plurality of voices that goes beyond that of the clergy. It’s a way of opening the perspective, adding different views. At the end of the day, this was the proposal of last year’s synod: A Church that is synodal, in accordance with the Second Vatican Council, where there’s not just one voice or one person, but a church that is a community of communities.

What is the role of women in the Church?

What is the role of women in the Church, or what should it be? Those of us who are inside, who feel we are living members of the Church and not mere spectators, feel that we are part of it through a cordial belonging and because of the faith that we have, but need more visibility, more places of leadership, positions of responsibility, a bigger presence in the decision making.

Is there a long way still to achieve this?

Yes. It is true that civil society has moved a lot on this and still much needs to be done, and the same thing in the Church. But I am optimistic, I never lose hope, and I want to believe that while we continue taking small steps in the right direction, even if they seem insignificant, that we are moving forward, without stopping.

And I think this is something that benefits the whole Church, not only women.

Does that imply that the priesthood should be open to women too?

Personally, as the structure is right now, I wouldn’t want for this to be the case. Things would have to change. But I think that if steps are taken, processes are made, responsibilities are assumed, the [ordination of women] can be at the end of this process, without much ado, as a natural progression.

It is true that when I accompany a person spiritually, I can’t hear their confession, and I have to call somebody else to lead the liturgy. And sometimes I wish I was able to do that.

There are many religious who are not treated properly, who are abused, or treated as if they were inferior. Knowing the reality from the inside, do you think that’s the way it is?

We have to pay attention, and if there have been cases of subjugation within the Church, we have to make sure it never happens again. We need to keep our eyes open and speak up, say what needs to be said and ask the questions that need to be asked.

This abusive behavior cannot be allowed, but not only when it comes to religious sisters. A person, whoever he or she is, cannot be treated as anything less than as a human being. Abuses of power do no good to the abused, but they also diminish the human dimension of the abuser.

Many times whoever “serves” does not understand the meaning of the word service, that it’s not a synonym of slavery …

Exactly. Yet many times it ends up being slavery. That why we need to dialogue, to speak up, to expose situations, without being afraid to do so. Because fear is also a way to submit people, that prevents a person from fully developing.

You talk about the importance of dialogue, of speaking up. What role does Pope Francis play in building what you describe as a path forward through dialogue, without fear of speaking up?

He builds this path through his gestures, with his words, his attitudes … I think he is a man who speaks more with gestures than with words, although his words are very clear. His way of accompanying the walk of the Church is one of opening doors with gestures, through words and by taking small steps.

Maybe he does not get to do everything he wants to do, or we want him to do more, but I value those little gestures, each small step forward. Hope stimulates me. We shouldn’t be afraid of taking risks. Fear can be paralyzing.

It has to be possible to move forward without being afraid, also when it comes to women in the Church: We’re not girls, we’re adults in our faith too, and we therefore deserve to have a say.