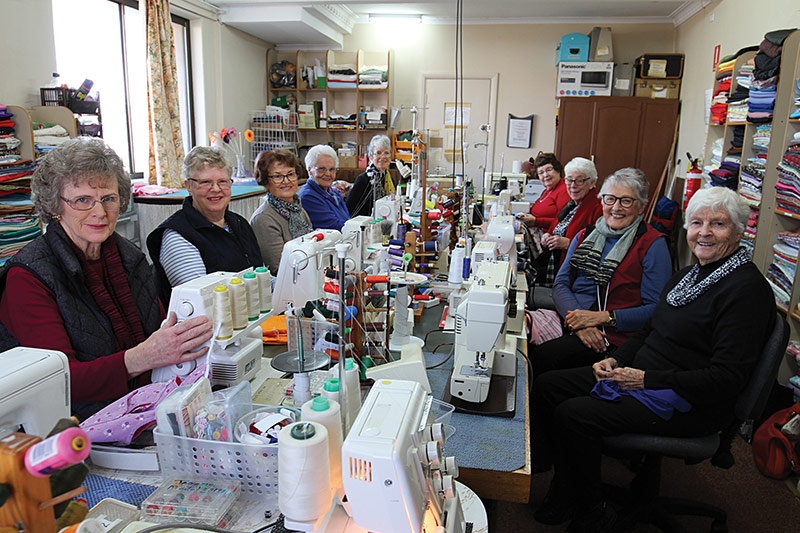 When Iris Steward, Nora Nelson, Myrt Lynch and Gert Richards got together on July 23 1969 to start making clothes for needy families, little did they know that 50 years later the St Marys Sewing Group would still be meeting once a week and producing thousands of items each year.

Back then money was scarce and the women unpicked unwanted garments to make them into children’s clothing. They also unpicked old jumpers, washed the wool and re-knitted it into toddler garments. Blankets and quilts were made from material scraps and old blankets. Originally based in the St Bernadette’s Church kitchen, then the church itself and the school, everything had to be unpacked and packed at the beginning and end of the day’s work.

While the venue of the sewing group has changed over the years, the special bond of friendship and the much-needed help for struggling families has continued.

Up to 12 women gather from 9am on Wednesdays in a building on South Road acquired by the parish. On arrival they collect material which has been diligently cut out at home by Joy Tamassy and Aileen Bagnell, who is known to fall asleep at night over a book of sewing instructions.

At midday they share Eucharist, followed by lunch and then return to sewing.

“We call it our therapy day,” laughed Lorraine Tiddy who joined the group about 10 years ago.

“We have a lovely time, we talk and work at the same time and solve all the problems of the world.”

Lorraine is one of the ‘newer’ members, with Aileen having clocked up 31 years and Mary Kelly 34 years. They quickly point out that their longest serving seamstress was Kath Finn who sadly died in January 2017.

“She didn’t quite make the 50 year anniversary, but joined the other 31 members sewing in heaven,” said Aileen.

These days the ladies don’t need to unpick garments, having access to fabrics through the generosity of those people de-cluttering their cupboards and donations from factories and stores. But they hold stalls to raise funds to maintain the sewing machines and buy elastics and thread.

Aileen proudly describes the clothing for children from babies to 14 year olds as designer quality thanks to some “creative” use of pieces of fabric which don’t always quite fit the pattern.

The women also trawl through catalogues to make sure they are up on the latest fashion trends.

“It’s important for the families to like the clothes,” said Aileen, who grew up in Kadina with her four sisters and made her first dress when she was 10 years old.

Mary said when she gave up work she thought “I am going to have to do something with myself” and saw a reference to the sewing group in the church bulletin. “I thought I would give it a try, and I’m still here,” she said.

One of the group’s more unusual tasks was making children’s costumes for the St Nicholas celebration in the church, and their mending skills have been put to good use by the local parish priest from time to time.

While some of the members are parishioners of St Bernadette’s, now part of St Ann’s parish, through word of mouth the membership has expanded to other areas with one lady catching two buses from her Vale Park home.

Aileen said friends and neighbours had been recruited in recent years but the group was always on the look-out for new members, the only pre-requisites being “they have to be able to sew, have a good sense of humour and want to help people”.

This article was written by Jenny Brinkworth and first appeared in The Southern Cross on August 02, 2019