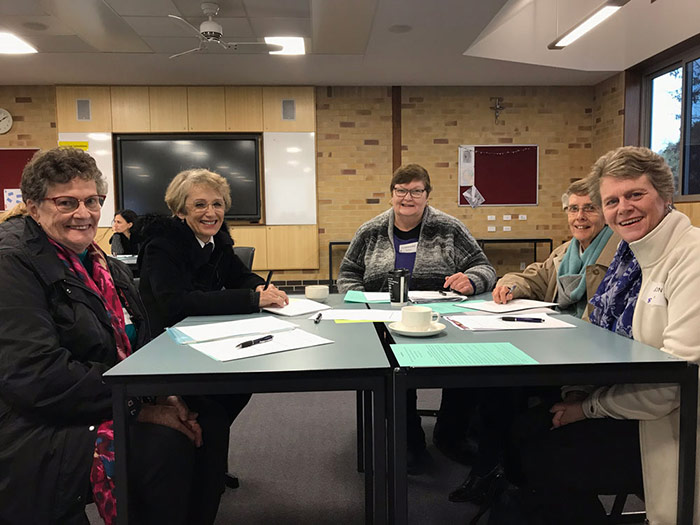 On Saturday July 20, over seventy women from the Archdiocese of Canberra and Goulburn met on a cold Saturday morning at Daramalan College to form a Catholic Women’s Group for the Archdiocese.

This meeting was the final step in a long path of consultation and discernment across the Archdiocese over the last sixteen months to make sure that Catholic women everywhere could speak and be heard.

A small leadership group travelled around the Archdiocese through May and June and organised two previous meetings in Canberra.   They asked everyone three basic questions: What are your hopes and dreams for the Church, what are the main barriers to achieving those hopes, and what things would help you achieve them?

What followed was an outpouring of sincere, deep-rooted concern for the Church and parish communities with repeated calls for a way to connect women across the Archdiocese, a way to ensure that all women had access to the opportunities for spiritual growth in the Archdiocese and an authoritative voice to speak on behalf of Catholic women.

While women from the regional areas attended Saturday’s meeting, many more were represented through a series of consultations held in Young, Braidwood, Bega, Bateman’s Bay and Goulburn.

These consultations ensured that the thoughts and feelings of women in country parishes about their faith and the situation in the Church today was included. Ms Moira Coombs, who attended all the regional consultations, said, “It was a great experience for me to speak to the women in country areas. In many places, it seemed to me that the parishes were dying. However then I heard the concern and passion of these women, and realized all that they are doing to keep those communities alive.”

The Saturday Forum brought all the listening efforts together to discern the meaning and purpose of women’s hopes about the Church, the barriers they experience and their suggestions about what would make a difference.

The forum was visibly moved by the passion, wisdom and clear-eyed determination of the women of this Archdiocese.  They want the best they can get for the Church and their parish communities and, most importantly, for their families.  This led to a second phase to the day, which asked two key questions of the Forum: What would be the key focus of a Women’s Group; and, what would it do?

The women of the Archdiocese want a group that emphasizes connection, communication, advocacy and representation. One example is ‘Provide a forum for fellowship and support for women to grow in Christian maturity and discern their call to mission.’  Another example is “represent us on bodies across the Archdiocese and speak for our needs and interests, especially to the clergy and Church leaders”.

The third phase of the Saturday Forum used a clever consensus technique of coloured cards to gauge the strength of support around the Group’s purpose and the establishment of a coordinating team. The sessions concluded with an invitation to recommend women to become members of that coordinating team.

Archbishop Prowse, newly arrived home from Rome, joined the women for lunch and the final session before celebrating Mass for the Feast of Mary of Magdala. Archbishop Prowse’s sermon explored the significance of St Mary Magdala being recognised as an Apostle and encouraged all present to follow her example and use the power of their direct encounter with Jesus to proclaim the good news.

In his final remarks, he reminded the assembly to have a special concern for the poor and vulnerable, for the powerless and those without a voice, especially women.

Sr Betty McMahon commented, “The committee has listened to our hopes for women and the church. They are bringing these to fruition. The Forum was energizing for those who attended.  The Committee created a friendly, open atmosphere.”

The Forum organisers expressed their thanks to Daramalan College who made their facilities available for the event.

All women are invited to nominate themselves and others to the Group, which will represent Catholic women across the Archdiocese and will link the women of the Archdiocese in information, prayer and support. The group will also provide a focal point for advocacy about women’s role in the church.

The group is yet to be named and the next step is to invite women to nominate those they believe would contribute to this important group (including themselves).   All those nominated will be invited to an Information Session and then to discern their level of involvement.  The co-ordination group will operate for an interim period mentoring those nominated to the new women’s group.

A key element of this initiative to link the women of the Archdiocese and provide them with a strong voice is a dedicated website www.catholicwomen.org.au

This article was first published online at Catholic Voice on 30 July 2019 and was written by Alison Weekes.