How would you describe women in the bible? 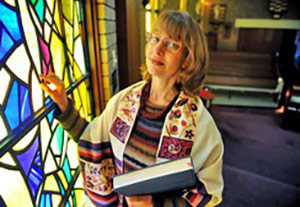 How would you describe women in the bible? This was the first question asked by Rabbi Sheryl Nosan when she addressed 34 women on the topic Re-viewing Women in the Bible, A Jewish Perspective. Sheryl encouraged her audience to contribute their opinions and insights to the topic at an event organised by the Council for Australian Catholic Women (Perth) at Trinity College on the 21 August.

Rabbi Sheryl talked candidly of her journey to become a Rabbi. When she was twelve, her three brothers held and danced with the Torah but she was excluded. This led her to being ordained as a rabbi in 1993 after studies in California and Israel. Last year she was awarded an honorary doctorate for her 25 years as a Rabbi.

Sheryl asked her audience to look deeply into the scriptures where contradictory models of women are to be found. Historically, there has been an assumption that women in the Bible are second class citizens. In Paul’s letters to Timothy, Titus and Corinthians and in the Acts of the Apostles, women were counselled to be submissive to their husbands, to remain silent and to cover their heads while praying. Paul saw the husband as the head of his wife and Christ as the head of every man.

She contrasted these views with gospel stories which showed women in a completely different light. In Luke’s gospel (8:1-3) Mary Magdalene, Susanna and Joanna, wife of Chuza were financially supportive of the ministry of Jesus. Jewish law at that time allowed women to own and inherit property. Women could also have access to their own money. The three women are examples of change agents. They use their influence to make a change. They are doing their part to make it possible for Jesus' ministry to continue.

In Mark’s gospel (7:24-30) The Syrophoenician woman bows down at the foot of Jesus and begs him to cast the demons out of her daughter. Jesus replies, “Let the children be fed first, for it's not fair to take the children's food and throw it to the dogs”. The ‘children’ are usually described as the Jewish people of Israel. The ‘dogs’ are seen as the Gentiles. The woman replies to him as an equal, as a mother, not as a meek person imploring a person of strength. She's using everything she's got. She remains steadfast when she is rebuked and her resilience and determination on her daughter’s behalf impress Jesus who grants her request. She reveals to Jesus a mother's passion, and a woman's power that comes from that advocacy. The Syrophoenician woman is a Gentile and Jesus has granted her request. She demonstrates to Jesus and the apostles to cast their net more broadly and spread the faith to Gentiles.

The woman at Jacob’s well in John (4:7- 42) describes the Samaritan woman who meets and talks to Jesus and then returns to her town. There she begins evangelizing, preaching, teaching, bringing others what is known as the ‘good news’. It is assumed that she was quite exceptional and had a tremendous impact as women of that time were not outspoken, were not leaders and were not exceptional. But there's always another possibility. Maybe women at this period, were leaders, were outspoken, were influential and were not quite so marginalized. We need to look more deeply into the Bible in the sections which reflect women's lives in the first century to determine these questions.

In all the gospels it is women who are the first witnesses to the resurrection. Mary Magdalene in particular has a prominent part in these gospel encounters. She has been described as the ‘apostle to the apostles’ and as the first one to bring the good news to the world.

These gospel portrayals of women and their interaction with Jesus are totally at odds with the instructions to women in Paul’s letters and in the Acts of the Apostles.

Rabbi Sheryl concluded by thanking the religious sisters present for being witnesses of our faith and bringing the foundations of that faith to all the world. She advised women to support each other in the faith journey ahead. Her talk was thoughtful and inspiring and revealed the richness of interpretation about women in the gospels.

This original article was written by Kerry MacFarlane