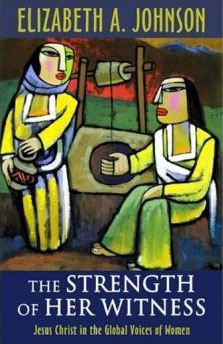 “The Strength of Her Witness,” edited by Elizabeth Johnson, contains articles by women around the world on the importance of Christ’s incarnation.

“What difference do women’s voices make in interpreting the meaning of Jesus Christ?” asks Elizabeth Johnson in her introduction to The Strength of Her Witness. This book, edited by Johnson, attempts to answer that question.

The title is an homage to the Samaritan woman at the well who, in the Gospel of John, goes back to her city and shares her unique encounter with Jesus. The gospel credits her with spreading the word about Christ’s mission and identity, saying that “many Samaritans from that city believed in him because of the woman’s testimony” (John 4:39). Women, according to both the author of John and the authors of The Strength of Her Witness, have unique gifts of evangelism and their own ways of understanding the good news of Christ. And like the woman at the well, who went back and inspired her entire town, the articles in this book hold meaning for all genders, ethnicities, and classes.

One of the book’s strengths is its breadth of contributing authors including prominent American scholars such as Carter Heyward, Kwok Pui-lan, and M. Shawn Copeland and contributors from Korea, the Philippines, Kenya, Ghana, Brazil, and India. All bring unique perspectives to deepen our understanding of Christ and his resurrection and incarnation.

Teresa Berger, a professor of liturgical studies at Yale Divinity School, writes about reading the Nicene Creed at Christmas and the difference between hearing it in German and in English. She points out that in German the line “and became man” has been translated with the gender-neutral “and became a human being.” In the end this is the message the book seeks to convey: Although Christ may have been biologically male, we are all made in God’s image and equal in God’s eyes.

The Strength of Her Witness: Jesus Christ in the Global Voices of Women Edited by Elizabeth Johnson (Orbis Books, 2016)